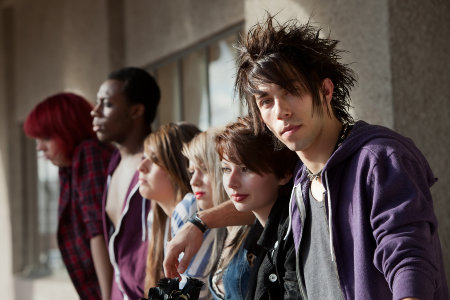 In 2008, an estimated 22 million young Americans under the age of 30 handed in their ballot, the third highest turnout for young voters in the nation’s history. Yet, this time around, according to a Harvard Public Opinion Project the 2012 election might have the lowest youth voter turnout since 1972.

Given these depressing statistics, the question is why? To size up the situation frankly, take a glance at where young people stand today. They’re abandoned, frustrated, feeling let down, pissed off, and jobless. Their future is literally being ripped at its seams. Whether you label the crisis—and yes it is a crisis—”The Clash of Generations,” “Generation Screwed,” or “The War Against Youth,” young people’s dreams are in limbo.

According to a Gallup survey, among 18-to-29-year-olds in the labor force, fully 44 percent are unemployed or underemployed—more than any other demographic segment. Many of them fall under the umbrella of “CENGAS”—college-educated, not going anywhere, a term coined by John Zogby of JZ Analytics. For the Obama campaign, the magic of youth that propelled the president to victory has lost its glitter.

When I ask my peers, “Why don’t you pay attention to the news or politics?” I’m distraught by the range of responses: “It doesn’t affect me…I hate the government, so why should I care?…The government is so far away…I can’t change anything.”

In an effort to appeal to my wonky side, let me call this a tremendous “engagement deficit.” This generation has a serious disillusionment epidemic. For one, the statistics on lack of civic knowledge in this country are embarrassing. Even though the average amount of schooling Americans have has escalated in the past century, the civic knowledge of my generation hasn’t kept pace. Civics and government is either not taught or not taught well—learning is strangled by the textbook and lectures—in schools.

How do we fix this?

“The best way to counter youth cynicism may be to rub their noses in the stale fruit of inaction—do you really want to have no say in policies that determine whether or not you have a job, what you pay for college, whether climate change ever gets addressed or even acknowledged?” writes Ann Beeson, a senior fellow and lecturer at the Annette Strauss Institute for Civic Life at the University of Texas.

That’s not to mention the power of social media and online activism. The study, “Participatory Politics: New Media and Youth Political Action” concluded that young people engaged in participatory politics were twice as likely to report voting as people who weren’t engaged. But let me be clear that activism is not limited to social media. “Unless you get out of Facebook and into someone’s face, you really have not acted,” writes Thomas Friedman, columnist at the New York Times.

Do you know why the Tea Party and Occupy Wall Street have had such momentous clout and magnetism in the past few years? Beeson argues that “they threw out tired old forms of engagement and communication, and inspired people to make noise, create political theater, to engage people’s emotions, and not just their rational brains.” In the horse race of the political race, we need to hand young people the reins.

I wish we had young people marching and campaigning in the streets for the presidential candidates to put their heads up, muscle their way past party lines, and propose a game-changing plan to save them. That would capture the hearts and minds of this generation and capture their votes as well. I wish that instead of high school government class, we had students working on campaigns and pinning their ideas to a cause that ignites them.

There was a stunning piece in the Monday edition of the National Post with the headline: “Our children need a commissioner.” While the writer, pediatrician Michael Shevell, was referring specifically to having a Children and Youth Commissioner who would assess the impact of government policy on children in the Canadian government, his proposals can also apply across the border. Twentieth century American crusader Mary Heaton Vorse summed it up well: “In the last analysis civilization itself is measured by the way in which children will live and what chance they will have in the world.”

I’m only 17-years-old so even though I want to cast a ballot, I can’t vote on Election Day. For my peers who are eligible to vote in next week’s elections, your dreams will stay in limbo if you don’t let your voice be heard. Do what the mother of Bob Schieffer, the final Presidential debate moderator, advises: “Go vote. It makes you feel big and strong.”

It’s on your To-Do List! Get your friends involved too.